It’s just over a year since Michael O’Hare opened The Man Behind the Curtain, and what a year it’s been. Last September we dined on olives wrapped in edible cellophane, hot and cold pea soup, salt and vinegar ox cheek and our cutlery was delivered in a cardboard box. Crazy but brilliant, we loved it but worried for its success. Even if people found it, secreted away on the top floor of a posh frock shop, how many would pay and keep paying £65 per head before wine for a no-choice menu made up of 12 fancy dishes like oysters with edible pearls?

From the nervy, self-conscious days of the opening, much has changed. The pristine white walls are currently daubed in abstract art, the cutlery boxes and the herb garden were swept away with the open-plan kitchen and save for a couple of dishes the menu has changed too. It’ll probably be all change again before there’s a table available.

What’s consistent is the aesthetic: food that looks and tastes exciting but with O’Hare’s dissident take on it. Exhibit A: Electric Daisyland, made up of sliced raw scallop, char grilled prawn, veal sweetbread, chilli and “head juice”. Head juice?

The waiter places it before us, whips the head off the prawn then squeezes its juices over the tail. Trust me, it tastes far better than it sounds with a touch of the rich shellfish tomalley that you get in a lobster to contrast with the raw, fresh creaminess of the scallop. Add a crisp, deep-fried sweetbread for piquancy and texture and it’s finished with a chilli sauce described as a mild form of Novocaine.

Pure O’Hare. He loves to tease, enjoys a visual pun. Tonight he’s on a Goth riff. Hake is buried in black squid ink and served in a pure white porcelain dish like an inverted mushroom. Black cod comes on a black plate garnished with black potato shards served with black squid ink and vinegar. But the wit never drowns his skill: Exhibit B his own dashi, an exquisite, salty, Japanese stock made from toasted cod skin. 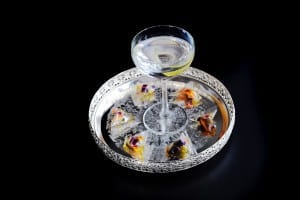 The Man Behind The Curtain.
Antipasti. Vermouth.

More fun followed with Iberian pork on a board (black, naturally) looking like there’d been a fight among the kitchen staff. Morsels of pork and egg yolk lay amid an accident of broken eggshell and charred cinders. The yolk provided a sauce for the pork, though I wasn’t entirely convinced by the cinders.

Nor is O’Hare afraid to show a feminine side. Leaves of apple marigold garnish the mozzarella ice cream while the final dish of tiramisu comes as a tiny teeny cupcake.

It would be tedious to recite all 11 courses. I loved his txangurro: spider crab baked in its shell, topped with a fried quail’s egg and bilberry. I loved, too, his dessert of creamy chocolate, olive oil and pork scratchings.

Take the wine flight and you will add £45 to the bill but you get six glasses and expert advice from Charlotte Rasburn, the approachable sommelier who jumped ship from the Box Tree to join O’Hare. We liked her match of Alsace Trimbach Gewurztraminer with the Electric Daisyland and the Spanish Cava Agusti Torello with the chocolate pudding and pork rinds. Indeed, liked it so much, she topped us up with a second glass.

To have won a Michelin star just over a year since opening in Leeds is remarkable, especially for a chef with no formal training who started 14 years ago at Judges in Yarm then Seaham Hall in County Durham. He learned a lot, he says, from the mercurial John Burton Race, followed by time in France. He briefly passed through Noma, the world’s No. 1 restaurant in Copenhagen, though he claims no great epiphany, saying it was nothing more than a few weeks on the fish section.
But it was in York that the breakthrough came at his short-lived Blind Swine which had a deafening bar and a chaotic booking system but his set menu was off the wall, unlike anything I’d ever eaten and enormous fun until it closed after a year. The Man Behind The Curtain.
Ice. Tobacco, vanille.

Back then I raved then about his mushroom, truffle and poached quail eggs served in an egg shell, the radishes planted in rye “soil” and memorably – and dangerously – a cocktail with every course. I wrote of O’Hare’s “raw talent and commitment” and even predicted that one day he would be famous.

The move to Leeds allowed him to create what he called a proper, grown-up restaurant, and it has certainly come of age combining exceptional food with an absurdist sense of theatre.

Which leaves him with a small difficulty with the name. It comes from The Wizard of Oz: “Pay no attention to the man behind the curtain” where the wizard creates his magic, the notion being that chefs should work their magic behind the scenes. It’s ironic then that whether by accident or design, TV and Michelin have thrust O’Hare in front of the curtain. On this night, three days after that Michelin call, he’s tripping from table to table in his spray-on jeans, silver pinny and leopard print boots, taking his curtain calls, and looking every bit the chef who is enjoying the limelight. Good on him.