Good things come in small packages? Not at Kardomah94 says Dave Lee, where size is everything.

Hull has always had more than its fair share of philanthropists. In boom times the likes of Christopher Pickering, Thomas Ferens and James Reckitt used their industrial wealth to build parks, almhouses and art galleries all over the city. Their names are to be found on the buildings and streets they helped create and they stand as a permanent memorial to their generosity.

In recent years, the name most likely to join this illustrious list is that of Malcolm Scott. Malcolm made his money from property and now sits on virtually every business and community board in the city.

He’s the man who tried to buy the Humber Bridge (which lead directly to tolls being halved), he opened a recording studio for young musicians in the city’s resurgent Fruit Market and now he has turned a city centre office block he owns into an experimental theatre space, arts studio and café bar/ restaurant. All while being a very nice fella.

Since opening a few months ago Kardomah94 – it’s a slightly clumsy handle, I know, but you get used to it – has become a fantastically popular daytime meet and eat venue for Hull’s creative community and passing shoppers and an even more popular night-time eatery for those visiting to watch a play.

It sits on the ground floor of the office block, the theatre on the left and the bar and restaurant on the right. Upstairs is a creative arts studio and there are no doubt plans to eventually fill every floor above with similar creative enterprises.

Malcolm persuaded Hull-born opera singer Amy Dickinson, who used to run a successful bistro elsewhere in the town, to look after the grub and she’s designed a short, simple Mediterranean-based menu made up mainly of pizzas, salads and sharing platters. Amy has also been known to pop up in performances in the theatre after her day shift in the kitchen.

The dining space is all bare floors, exposed lighting and art by local artists. I’ve visited a half dozen times now and I prefer to lounge in the settees by the window as they provide a comfy place to recuperate after your meal; the portions at Kardomah, you see, are massive.

The K94 antipasti sharing board, for instance, comes with three or four different cured meats, a pile of sun dried tomatoes, a couple of chunks of thick cut fresh olive bread, buffalo mozzarella, a dish of olives, a dressed rocket and parmesan salad, red onion marmalade and dipping oil. It’s £9.50 and could probably feed three people.

I foolishly tackled one by myself and couldn’t get through half of it. And I know how to eat. 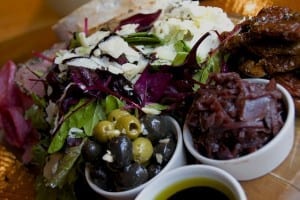 Slightly more manageable are the salads. The caprese still heaps up inside a decent sized bowl, though, and the Italiano is a huge bowl filled with mixed leaf, pastrami, salami, olives, parmesan, balsamic and seasoned with rock salt and crushed pepper. Both are as tasty and hearty a salad as you’re likely to encounter.

Winner in the outrageous vastness stakes, though, are the pizzas. They’re a good foot-and-a-half long and the wafer-thin, crispy, undulating bases creep off the edge of the board they’re served on in an apparent attempt to escape the table.

They are covered with a generous serving of toppings and are pretty much impossible to finish by yourself. The first time I ate at Kardomah, the waitress offered me a doggie bag for the leftovers as she set the pizza down. I didn’t even get chance to fail to finish it before being called a wuss.

I can recommend the Birdman (a layer of pesto, chunks of chicken, and rocket and parmesan salad) and the Carnivore, which features – deep breath – bacon, chorizo, Lincolnshire sausage, meat balls, chicken, mozzarella and Napoli sauce.

You may think that this constitutes far too many toppings. You are wrong. It constitutes far, far too many, but trust me you won’t complain when it appears in front of you; it’s a proper feast. I’ve yet to try the pepperoni but that’s next on my list, purely for the wonderful description on the menu – ‘Pepperoni finished off with pepperoni served on a bed of pepperoni. May contain pepperoni.’

Pizzas are £8-11 and there really is no arguing with Kardomah’s pricing or portion size policies. They could maybe do with a few more puds, though.

During the day there is local ice cream or a huge portion of cake (the carrot cake is particularly good) on offer, but that’s it. No other choices. Actually, considering the size of the main meals, few people could actually face afters.

You can tell that I’m a huge fan of Kardomah94. When it opened I thought it was a brave, philanthropic venture but I had my doubts that it would work.

However, Malcolm, Amy and a small community of staff and theatre and arty types have come together and created something of real worth from a lifeless, grey office block.

Whatever time of day you visit, Kardomah has a friendly, buzzy, creative atmosphere and it’s very pleasing that it has swiftly found a place in the hearts (and stomachs) of the people of Hull.