Once down on its luck, Elaine Lemm finds a little TLC has transformed the charming Stone Trough pub in its beautiful setting above a country village. The Stone Trough Inn is a charming pub sitting above the disarmingly beautiful village of Kirkham Abbey near Whitwell on the Hill. In the Noughties, the inn was, in my opinion, one of the best pubs in the whole county but its reputation latterly has been, dare I say, a little capricious.
All that changed when dashing to the rescue came Martin Bridge and Andrew Whitney, who had turned another languishing county favourite, the Yorkshire Hussar pub in York, on its head. They revamped and renamed it the Whippet Inn with a whole new concept. At the Trough, however, their pledge was that, loving the inn as they did, they wanted to change very little except to breathe the life back into it.

Several months on since their takeover, little looks to have changed which I believe is a good thing – though a couple of the torn barstools could do with a little attention. The inn divides neatly between a more formal restaurant and a pub with real fires, a games room and a well-stocked bar with a worthy number of both real ales and wines. I like the pub part; it is cosy and approachable, especially on a particularly miserable autumn day. We hunkered down by the fire and let the promise of a good pub wrap itself around us. 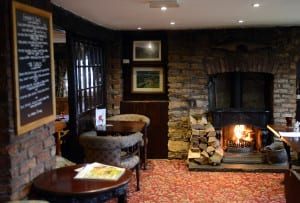 At the Stone Trough is a menu so confident it runs right through the day and is complemented by a sandwich menu at lunchtime. On a Sunday, they have ventured down the Carvery route for lunch that, at £10, £14 and £17 for one, two and three courses respectively certainly looks appealing enough. But this was a Saturday and we were in need of a serious lunch and we managed it thanks to the good food and happy, helpful staff.
Good as lunch turned out to be, it wasn’t without one slightly alarming problem. Beer battered prawns with lightly spiced wasabi mayonnaise came charmingly presented in a steamer basket. The batter was crisp and piping hot, but cutting into the prawns, they looked a touch translucent; the heat had not quite made it through to the meat. Not worth the risk, they were returned to the kitchen and we were showered with a flurry of apologies. The freshly cooked batch arrived 10 minutes later and was faultless; this time the prawns were a lovely pink colour and hot right the way through. The little hiccup was dealt with well by the staff and quickly forgotten by us.
The other starter of butternut squash soup was perhaps a little unexciting but well flavoured nonetheless. Across the table, a steak and kidney pie seen on another table was ordered without much reference to anything else on the menu. I did understand why, it looked rather delicious. The meaty confection sat in a pastry case and topped with a deep layer of creamy mash. The filling had a good balance of steak to the kidney in a thick, rich gravy. Happy smiles for this dish. Pub favourite of fish and chips did not disappoint either. There was a whale-sized freshly cooked, fish balancing precariously on a handsome portion of chips. The mushy peas were perhaps not as mushy as I prefer but were more than acceptable; the tartar sauce delivered a good punch. There was a slightly grey, unappealing pickled egg begging for attention but I must admit, it remained untouched and unloved. Sorry.
To round off this classic lunch demands a pudding, but I had to pass; I couldn’t eat another thing. Not so on the other side. An apple crumble with ginger custard was declared lovely. This dish once again showed the competency behind good, honest, unfussy cooking.
Unequivocally, the rescue of the Stone Trough is a triumph and triumphant in not having messed around, gussied up or twiddled with it. They have put good staff both front of house and in the kitchen and let the lovely location do the rest.
Seriously, what more could you want from a country inn?
The Stone Trough Inn, Kirkham Abbey, York, North Yorkshire YO60 7JS. 01653 618713. Lunch for two with two glasses of wine £52.50. Open
seven days a week, food served 12–9pm.